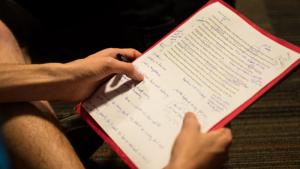 Imagine a student named Andy who has slowly been developing a curiosity about the meaning of life. He has started visiting websites, reading books by everyone from militant atheists to Islamic fundamentalists, and even occasionally asking God to show him if he is real or not. The one thing that scares Andy about going forward in his investigation is that it seems to him as if most religions hate gay people. He has been raised by two loving men who have been living together for over 20 years and poured their all into helping Andy become the person he is today. Andy is worried that if he takes any steps toward religion, he will be encouraged to distance himself from his fathers and to look down on them. Nothing would pain him more.

Eventually, Andy plucks up the courage to visit a Christian event being held on his campus. He really enjoys the talk about Jesus and is fascinated by seeing people so passionately singing about God. But the question about his dads remains. As the meeting comes to a close, a friendly Christian named Sarah bounces over to chat with Andy. After some friendly conversation, Andy reveals that he is on a spiritual search. Sarah tells Andy she'd be happy to help answer any questions he has. Andy says, "Yes, there was one thing I wanted to ask you. What do Christians think about homosexuality?"

Sarah, who has recently read a couple of books about biblical sexuality, knows exactly how to address this one. She explains God's design for sex and the way in which all of us, gay or straight, have twisted his original design. She talks about sin, and repentance and grace. She is firm and clear, but also kind and friendly in her manner.

Andy listens the whole time, takes it all in, thanks Sarah, and leaves the meeting to continue his spiritual journey elsewhere. It seems to him as though the very mention of homosexuality to a Christian triggers an ethical discussion in which "sin" is repeatedly mentioned. Sarah was friendly enough, but if the mere mention of homosexuality inspired such a response, who knows what a Christian might say if they ever met his dads? Andy feels a little sad, because he quite liked Sarah and also what the speaker had said that night about Jesus.

It could all have turned out so differently. In a few moments, I'll introduce you to four simple words that could have helped draw Andy into the Christian community rather than drive him away. But before we get to that, let's spend a minute learning from Jesus.

Jesus Gets to the Real Issue

There's a story in Mark 12:18-27 about Jesus and questions. In it, he's approached by some people asking him for help with a tricky question.

They start their question with a tale about seven brothers.

The first brother in their story marries a woman and then dies. The second one marries the widow, but then he also passes away. The third one meets a similar end. All seven end up marrying the woman before being carried out of the honeymoon suite in a casket. Finally, the woman dies.

The storytellers conclude this tragic narrative by asking Jesus: "At the resurrection whose wife will she be, since the seven were married to her?”

They seem to have a genuine and quite interesting concern about the dynamics of marriage in the new creation.

Jesus, however, only very briefly deals with this question.

Instead, he starts talking about a single line from the biblical book of Exodus. In it, God describes himself to Moses as "the God of Abraham, the God of Isaac, and the God of Jacob." God's use of the present tense, Jesus points out, suggests that those long-buried men are still in some sense alive. If they'd been annihilated, God would have used the past tense when speaking about them.

The first time you hear Jesus' response, it seems as though he is going off on a tangent. When you reread the passage, though, you notice that the people asking Jesus the question were from a religious group called the Sadducees. The Sadducees generally did not believe that anyone would be raised to new life beyond the grave.

So, while they may be verbally presenting a thorny quandary about whether the bonds of marriage survive death, the story of the seven husbands is actually an expression of their skepticism about physical life beyond death. Jesus therefore makes sure to bring the conversation around to the real issue on the table: Is there any basis for believing in a resurrection to new life?

Jesus was cutting past the question on the Sadducees' lips and was instead grappling with the one in their hearts and minds.

If you want to follow the example of Jesus in getting to the question behind the question, then the first thing you need to learn is four simple words.

The four words you need are:

You take these words and form them into a question, which reads like this: "Why do you ask?"

Yep, it really is that straightforward.

If the father in the video had said, "Why do you ask?", then maybe he would have had a less awkward car ride.

Had Sarah inquired of Andy, "Why do you ask about homosexuality?", then she might have heard all about his great relationship with his dads. She could have given a shorter and more helpful response, such as, "Wow, they sound like great parents. The simple fact is that Jesus never turned anyone away. He loves your dads as much as he loves anybody else, and I think he wants you to love them too." Maybe Andy would have come back to the next meeting, or perhaps the conversation would have turned to discussion of his own spiritual search. His burning question of whether he would be asked to reject his dads would have been answered and he could begin to consider Jesus as a serious option.

I once gave a talk on a university campus about suffering and presented a strong intellectual and emotional case for why God is still good even if evil is flourishing. Afterward, a woman approached me and asked why God allows suffering. I was tempted to ask her if she'd been listening at all to what I'd just said! Instead, I resisted the temptation and said - you guessed it - "Why do you ask?" Tears filled her eyes as she told me that her grandmother had died the previous week. She didn't need an argument about suffering, she just needed someone to listen to her and cry with her. One simple question made it possible for me to respond to her in a more helpful and sensitive way than I might have otherwise done.

Next time someone throws a question your way, why not send four words back their way? It could unlock the real issue on their mind and take the conversation to another level.