Why You Should Ask More Questions in Spiritual Conversations 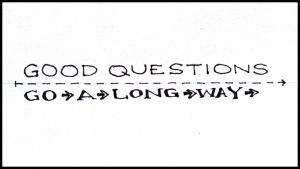 Jesus’ second question, “Who was a neighbor to this man?” ripped through the pretense, and exposed the pride and racism of the man with whom he was talking. He moved the conversation away from the theoretical and into the realties of everyday life.

You don’t have to wait until people ask you questions before you start asking them some. You can do it with anybody. The trick is to cultivate genuine curiosity in the thoughts and lives of others.

Recently, I was at Starbucks with two of my Christian friends discussing what heaven is like. None of us are professional theologians, so our conversation was a combination of biblical reflection and flights of imagination. Toward closing time, a barista started wiping the tables around us. My friend turned to her and said, “Hey, we were just discussing what we imagine heaven is like. What do you think?” She paused to think and then started sharing some of her own thoughts. Before long, she had sat down and was as engrossed in the conversation as we were. If we’d offered her a Bible tract or asked if we could have a minute to share our beliefs on the afterlife, then the conversation would likely have gone nowhere. But because we’d invited her to be an equal participant in our discussion, she had the opportunity to talk in-depth about the big questions of life with a group of Christians.

Jesus was an excellent questioner and listener (for more on that, read How to Listen Like Jesus for Meaningful Spiritual Conversations). How could you use Jesus-style questions in your evangelism? Share your ideas or experiences below.