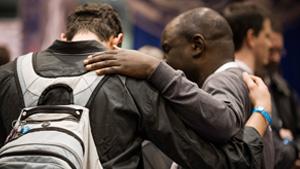 “I am Jesus, whom you are persecuting,”
he replied.

I have a friend who isn’t yet a Christian. If we have time for an extended conversation, it will usually turn toward spiritual things. He’s spiritually curious. For the past couple of years, he still goes to church almost every week, and for a season, we were even in the same small group. He’s heard the Gospel again and again.

But he still won’t commit his life to Jesus.

His hangup? He’s just not sure about Jesus being the only way to truth and heaven.

In his mind, there are so many other great religions. How could he choose just one? Sure, the benefits of Christianity is clear to him—a sense of peace, a supportive community, helpful reminders to love our neighbors—but he wonders why Jesus specifically has to be a part of it. Can’t we just have the great Christian values? He’s open-minded, so much so that he doesn’t want to close off the other options by becoming a Christian.

I really think he’s heard enough words about Jesus. He knows the Gospel. But what I long for him is to have an experience that entices him beyond his fears into faith. My prayer is that Jesus becomes real to him, so real it would feel worth it to give up everything else up to follow Him.

I’m sure you also know and love others who have heard the Gospel explained clearly, who know the stories and tenets of Scripture, and yet still haven’t given their allegiance to Jesus. So after they’ve heard the Gospel—especially if they’ve heard it again and again—are there other ways to help our friends encounter Jesus more experientially? Is this even a possibility?

More pointedly, can people who don’t yet follow Jesus hear God’s voice or experience Him in some way?

It happened in Acts 9 in a big way. Saul, as a steadfast Israelite, was persecuting the members of the Way. He felt they were distorting the Jewish traditions of faith, and in his zeal, he would do all he could to put a hard stop to it. With smug satisfaction, he had tacitly approved of the stoning of a Christian leader, and then was willing to travel beyond Judean borders to raid homes and bring these heretics to justice. While “breathing out murderous threats,” that’s how he found himself on the road to Damascus.

While traveling, Saul was pulled up short by a flash of brilliant light. He was literally floored. It was on his hands and knees that he heard a voice:

“Saul, Saul, why do you persecute me?”

“I am Jesus, whom you are persecuting.”

And this experience would change him forever. In this moment, Jesus gave Saul explicit instructions on what to do next, and through these instructions, he’d meet a believer named Ananias (who was also given specific instructions to find him). The followers of Jesus welcomed Saul into the Way, and God would use him to spearhead the Christian mission among the Gentiles. He’d be given a new name, Paul, and he would write many of the letters of the New Testament. His imprint is so large on Christian history that many of us who trust in Jesus, yet are not of Jewish descent, in some way can connect our spiritual heritage back to Paul.

But can I just state the obvious?

While he was still breathing out murderous threats against believers.

And it changed his life.

In InterVarsity, one way we’ve been doing that is through listening prayer.

Now, that might seem like an odd choice for evangelism. Listening prayer has been used with Christians to increase their sense of intimacy with God. Books like Dallas Willard’s Hearing God help us in this direction. But what if we could help our friends who don’t yet know Jesus to do the same—to hear God for themselves? Would that offer some extra help to persuade them about the truth and reality of God?

I started experimenting with this on accident, although I was already on a particular trajectory. Through my dissertation in Christian leadership, it became clear to me that the one thing that every Christian should be able to do is to recognize God’s voice in the everyday—through Scripture, community, and the Holy Spirit—and obey what they heard. At least, that’s what every Christian should strive to do. (For more details on how I got there, check out Real Life: A Christianity Worth Living Out). So I was doing a lot of teaching on hearing God in that season.

Five years ago, I was prepared to speak on listening prayer at a weekend conference in the Pacific Northwest. At some point in the preparations, the organizers told me that there were people who didn’t follow Jesus yet in the room. After some initial wondering of whether or not I should change my talks, we decided to stay with the planned material. On Saturday night, I invited people to hear God’s voice together.

The next morning, I gave an invitation and two people gave their lives to Jesus. When I asked them what happened, Christine told me her story. She started to explore Christianity after the death of her Christian grandmother a few months earlier. She was close to her grandmother, and her death prompted Christine to ask questions about the purpose and meaning of life. So she started hanging out with InterVarsity Christian Fellowship on campus.

During the listening prayer exercise the night before, she saw Jesus in her mind’s eye with His hands extended toward her. Then, she saw her now-deceased grandparents behind Him, with Him—and all of them were inviting her to follow Him. The experience flooded her with faith, and she gave her life to Jesus during the invitation the next morning. When I saw her again a year and a half later at a different conference, she was still growing in her relationship with Him!

After all that she’d learned as a seeker, she had an experience with God that convinced her that Jesus was real, and that He was worth her complete allegiance. What’s great is that I didn’t even need to be particularly persuasive or miraculous. I just gave her an opportunity to hear God’s voice.

It also happened a few months ago. Jacky walked up to me after a Prayer Prompt at the Greek Conference in Los Angeles. He said, “Yesterday, I was an atheist. Today, I’m a Christian.”

Intrigued, I asked him to explain. He said that he has a science background, but started to hang out with InterVarsity folks. What got him really curious was when his staffworker offered words she had heard from God about him, causing him to ask, “How did you know that?” His curiosity was lit. When they invited him to this conference, he felt that he should collect the data and see for himself. That’s what any good scientist would do. He was in a track that helped him start to experience God for the first time, and when given a chance to hear God in a listening prayer exercise during the Saturday night session, he heard the word “Believe.” He knew it was Jesus, and gave his life to him that night.

Three months later, he’s been planting a bible study to his fraternity brothers.

And my hope is that he’s another Saul in the making.

*** Some of this article has been excerpted from an article found on Ed Stetzer’s blog at Christianity Today.