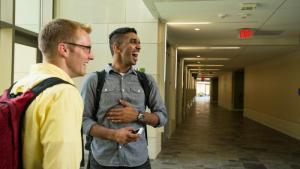 When I was little, I used to park myself in front of the TV every Saturday morning to watch my favorite cartoons and dozens of commercials for Cal Worthington’s car dealership.

Cal looked like a Texas tycoon, dressed in a flashy western suit and big cowboy hat. A twangy country jingle played as a voice announced, “Here’s Cal Worthington and his dog, Spot!” Cal would show off his “dog”—which never was a dog, but usually a tiger or an elephant or an ostrich—and then in his smooth, southern drawl, he would rattle off the fantastic deals of the week. He sold thousands of cars this way. I thought his cars were heaps of junk, but the ostrich was pretty cool.

It recently dawned on me (much to my chagrin) that I’ve thought of evangelism as a sales job. Check out how the marketing process echoes the way in which Christians sometimes spread the gospel:

In subtle ways, then, we’ve picked up the wrong image of an effective evangelist. We’ve listened to the witty lines and slick responses of some well-known evangelists and tried to come up with our own versions. In our efforts to try and “sell” Jesus, we’ve transformed the role of the evangelist into that of a used-car salesman for the Lord.

We think if we can get someone to regurgitate our canned “Sinner’s Prayer,” then we've sealed the deal. We're obsessed with getting people to say The Prayer. Many evangelicals won’t even consider a person saved unless they can pinpoint the day, hour, and very minute she invited Jesus into her heart.

The Problem With Selling Jesus

The problems with the “evangelism as sales” paradigm are enormous because Jesus is not a product. So many products in our world are unnecessary, but Jesus is absolutely essential.

If we minimize or negate the cost of following Jesus, we are being terribly dishonest. I’m sure this is why many new believers become confused or disillusioned when they eventually read “you have been given not only the privilege of trusting in Christ but also the privilege of suffering for him" (Philippians 1:29).

The packaging we try to put Jesus in might make him appear more attractive to the target market, but the fact that we try so hard to dress up our Savior and make him palatable or “relevant" shows that we think our “Product” can’t sell himself. Our lack of confidence that people will see his immense quality must be insulting to him!

Similarly, our overwhelming focus on helping people say The Prayer just isn’t scriptural. A person doesn’t belong to God because they said The Prayer—they belong to God because God drew them to Jesus, and they believed in him, so they have his life in them. People don’t have to say The Prayer to clinch the deal, although it may be one of the steps they take as they entrust more of themselves to Jesus. But by no means is The Prayer the pinnacle of their spiritual journey. They need to be taught and even challenged to trust, follow, surrender, obey, and remain in Jesus. Isn’t that the same for any believer? Isn’t that what we do for the rest of our lives on earth? Jesus offers us a life in union with God, not an admission pass.

Jesus wasn’t a slick salesman. He made it clear that people can’t come to him unless the Father draws them to him (John 6:44, 65). He said that his job was to speak the words of life (John 6:63), keep all those whom the Father had given him (John 6:39), and give them eternal life.

Did Jesus use language and images that were pertinent, meaningful, and relevant? Absolutely. But he wasn’t trying to conjure up a spiritual interest that wasn’t already there.He spoke about the living bread from heaven because he wanted to bring forth those whom God had given him, those with a genuine hunger for life in union with God. He was looking for vital signs—for a spiritual pulse. In the process of keeping those people God had given him, Jesus also caused those who had no spiritual hunger to move on. That’s what the Father sent him to do.

Jesus wasn’t selling himself, or the kingdom, or God. He was locating those who already belonged to him. He was giving substance to the indescribable hunger that true seekers have. He was putting words to their deep thirst. He was explaining why they felt strangely drawn to him.

Jesus’ approach is very liberating. It reminds us that, as evangelists, we do not have the responsibility to create a hunger for eternal life. That’s not our job. We’re only sent to point people to Jesus, let them hear his words of life, see him as he is, and check for signs of spiritual life. The whole endeavor of “converting” someone is a mistake. God converts people; we merely locate them and help them understand and trust what they are already experiencing. There is usually much explaining to do, much to clarify, some areas to challenge, and a great deal of listening to do. But there is no burden to create a spiritual interest that isn’t there.

This new paradigm of evangelism frees you up in three different ways:

We evangelists don’t sell admission tickets to heaven. Nor do we hawk the spiritual equivalent of secondhand cars. Instead, we point to Jesus as the source of immediate, abundant, and eternal life.