How NOT to Speak Christianese 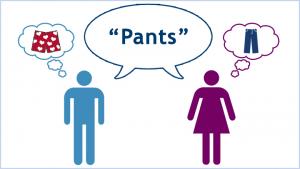 Language works well if a group of people experience similar mental imagery when they hear words like “pants,” “horse,” “tree,” or “apple.” Our imagery never matches up exactly with someone else’s, but it usually correlates well enough for us to hold conversations and understand what the other person is trying to say.

This can happen when foreigners—like the woman and me—converse, and it can also happen with our own compatriots. My friend Matt, for example, purchased a mobile phone for his technophobic grandfather, who turned the device on, read the word “menu” on the screen and roared with incredulity "Menu?! Why on earth would I want a menu?" He had only ever encountered the concept of a “menu” in a restaurant and the word therefore seemed entirely out of place appearing on his telephone.

If you don't believe me, try this experiment: Think about the word “conversion.” It is filled with meaning for you, from all the Bible studies, books, and talks you have absorbed. If you had never encountered the Christian faith, though, what imagery would “conversion” trigger in your mind? Take 20 seconds to see what comes to mind.

I usually hear it used to describe a building project that makes the attic habitable (a “loft conversion”), as a term for comparing the relative value of money from different countries (a “currency conversion”), or as a way of changing the format of a document on a computer (“file conversion in progress”).

Sometimes I hear it described in relation to religion. But, with a few possible exceptions, religious conversion in our culture is not viewed warmly or perceived as an inviting prospect for most people. In fact, it often has overtones of manipulation (“that person is trying to convert me”) or of desperation (as in “deathbed conversion”).

“Conversion,” then, is not the straightforward word for most people that it is for Christians.

Neither are many of our other Christianese words.

Explanation actually happens all the time in Christian gatherings. Our talks and presentations are full of it. And our GIGs are aimed at collectively uncovering the true meaning of initially confusing concepts. We are usually quite good at explaining. That's why speakers love using illustrations.

While explanation is a very useful tool, it does have some drawbacks. If we try to explain every single unfamiliar word it can become time-consuming, as well as reinforce for our friends the sense of Christianity as something foreign and complex. Explanation may be a useful tool in a talk, but it needs to be used more sparingly in other contexts like conversations and when we are leading meetings.

Some of these suggestions may resonate with you more than others. Don't feel you have to copy them. Instead, why not come up with your own language for communication about Jesus? The key is to be easily understandable yet also faithful to the biblical or theological reality you are attempting to convey.

What's a Christianese word that you've found trips up your non-Christian friends? How have you tried to explain or translate it for them? Share in a comment below.