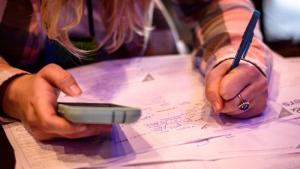 A small group is an incredibly fruitful context in which to invite students to consider becoming followers of Jesus. It is a safe place, where there is a community of friends. And after someone makes a new faith decision, they can continue to thrive in that same small group community.

A student leader can feel some real fear about making a call to faith in heir small group. There are a number of hurdles to overcome. Those hurdles can be overcome with good coaching from a more experienced student leader or staff.

But be forewarned: coaching is a long process. And when we don’t do a thorough job of coaching, we may be setting ourselves up to fail, and we may feel burned by the experience. But good and thorough coaching builds trust, fosters faith in the face of failure, and creates opportunities to pass on a number of kingdom skills and values which may bear lifelong fruit in us as disciples.

Jamie (an IV staff worker) learned this the hard way. Back in 2012, she started coaching student-led calls to faith in her first year of planting at University of Kansas (KU). Jamie had two thriving small groups and a core team made up primarily of freshmen women. Raeann was her go-to person on campus: a smart, eager risk-taker who quickly became the natural leader of the group. As a pre-med student, Raeann had been trying to grow in boldness to reach her other pre-med friends, some of whom had come in and out of the small groups. After some convincing, Raeann agreed to give a call to faith at a joint small group meeting with the other thriving group.

Jamie knew this was a major moment for the chapter and would determine if others would follow Raeann’s example. So she spent more than the usual amount of time coaching Raeann. Together they looked over Scripture, determined discussion questions, practiced giving a gospel presentation using the Big Story over and over to each other, offered constructive feedback each time, and worked hard on how they wanted people to indicate their response.

When the night of the small group came, Jamie was there and eager to cheer Raeann on. Raeann was excited and nervous that four of her non-Christian friends had come. When the moment came, Raeann wonderfully pulled together the threads of the conversation and began her gospel presentation. Each student wrote their response on an index card and gave them back to Raeann.  It was great! (Or so she thought.)

When the night was over, Raeann was beaming. But without even glancing at the cards, she handed them over to Jamie. As if by reflex, Jamie reached out and took the cards from her. Apparently Jamie was going to do the follow-up.  Raeann thought she was done. She had invited a response, and the moment Jamie accepted the response cards, Raeann was opting out of the unfolding process.

As Jamie drove home that night, she was both proud of herself and kicking herself for not realizing that she had to show Raeann that there was more to calls to faith than just presenting the gospel. Because Jamie failed to coach the whole process, much fruit was sadly squandered that night.  They didn’t know what happened to those decisions.

Four years later, Jamie now has a five-step process for coaching others on how to give calls to faith in small groups, and it has borne much fruit.

5 STEPS TO LEADING STRONG CALLS TO FAITH IN SMALL GROUPS

1. Prepare the content before the call to faith. If you’re coaching someone else, cast vision for the call to faith and have a willing volunteer ready to make a call to faith in their small group. It takes at least a week for a thorough preparation process, but expect it to take longer than you think it will.

b. Decide how students will be prompted to respond, and prepare for that group time.

(1) no one is ready to move that night

(2) there are people ready to make a decision

(3) someone is talking a lot and processing through their feelings about life and faith. In the case of number three, you need to be able to release people to leave the small group, yet still focus on the one who is processing. The plans don’t have to be complicated, but decide how you will pray to close in each case.

d. Next, plan out a follow-up plan.  It is easy to wing the follow-up, but we miss so much of what God is doing if we do! The call to faith starts at small group but doesn’t end until everyone has been followed up with.

e. Last, set a time and date for your debrief conversation.

2. Practice the call with another student. Make sure it’s a different person that who you prepped with.  Why?

a. Practicing again with someone with fresh eyes and ears will make the call to faith clearer. If the person you are practicing with doesn’t understand how to respond, no one else will either. This extra practice provides an opportunity for things to be adjusted.

b. It builds ownership for the call to faith in both you and the person practicing with you. Now you are partners! The partner can be prepared to share first to break the ice if necessary and provide a clarifying example of response.

c. It creates a built-in team for follow-up. This is a great way to begin to mobilize a member to assist and participate in follow-up after the small group.

When the night of the small group arrives, our job as a coach is to be there, watch, and cheer on the person giving the call to faith. Don’t be afraid to jump in and have an impromptu debrief with the small group to capitalize on momentum or head off a difficult night at the pass. (text before and after the call if you can’t be there, so they know you are praying.)

4. Follow-up and count decisions. Immediately after the study, I gather my the students who will be doing follow-up. List who they need to follow up with and what questions or information to ask. Only count decisions once follow-up has happened. This puts some urgency behind the follow-up and helps to emphasize the need to discern with those who responded what their decisions actually mean.

5. Debrief with the student. One or two weeks after someone leads a call to faith you should debrief. Ask some version of the following questions:

a. What happened? How did the non-/nominal Christians respond to the call?

b. How did you see the non-/nominal Christians responding to you or your small group? Note: This question is especially key if none of the non-Christians were ready to decide to follow Jesus, as it can reveal that God has used them and the small group to build trust and walk with others on their spiritual journey. It can also give insights on how manage awkwardness or tension.

c. What were the stated barriers to the gospel/response?

e. What is your next step? Note: This keeps the Discipleship Cycle going. Determine the appropriate response to the non-/nominal Christians in the small group is key in continuing to lead and walk with them.

One more note: Ask these questions even if someone made a decision to follow Jesus, because (1) it helps unlock the testimony of the new believer and (2) it helps us better understand what God has done.