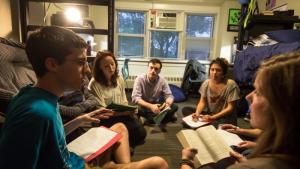 How, then, can they call on

the one they have not believed in?

And how can they believe in

the one of whom they have not heard?

And how can they hear without

someone preaching to them?

Angela was a junior at UC San Diego and a a new believer.

She was pumped to bring her roommates to The Edge, her chapter’s weekly gathering,  to hear Ryan, a gifted evangelistic preacher, speak. This week was special - it was their once-a-quarter outreach and the only place in their ministry where someone would be invited to make a decision for Jesus. She fasted and prayed that her roommates would come. She invited them, made sure they knew where it was, and even met up with them to study before the event.

But none of them came.

She went by herself, bummed and hungry. She was frustrated because Ryan’s talk was great, and she really thought that her roommates would have responded if they were there.

When she got home, she told them all about Ryan’s message. But that was it. It was all she knew to do, and she sulked knowing that it would be another quarter before the next Edge where they could respond to a call to faith.

Later that semester, she realized that they might never come to The Edge. She assumed that her goal was to get them there.  She wasn’t the “cool event speaker,” and she assumed that it couldn't be her who presented the gospel or called people to faith. She thought that was Ryan’s or her staff worker’s job.

What if someone had taught her, back then, how to invite people to follow Jesus in a smaller setting?  Instead of waiting for a big event, what if she could act on her discontent by helping her friends respond to Jesus in the places where she had relationships?

The truth is that no matter how big we can make a large group or outreach event, the majority of the campus will never attend them. We still need them, and they absolutely deserve effort to be effective. But if we’re serious about reaching every corner of every campus, we’ll need more InterVarsity students who are not only equipped to invite people to large groups or conferences, but who could also help someone begin to follow Jesus where they are at. And given that we have a wide network of student-led small groups, what would it look like if every student could make calls to faith in the communities they serve and lead?

As more students across the country are being equipped to make a call to faith in small groups, we are finding these benefits:

1.    We can reach every corner of campus. As we plant in new communities, there are more students involved in a chapter who will never come to a large group. But they could be connected to a BCM, Arts, Athletes, or LaFe small group. If we want to reach every corner, we need to be people who can make a call to faith in every corner.

2.    Everyone gets to play. Evangelism shouldn’t only be in the hands of staff experts. Instead, Jesus invites every believer to experience the joy of inviting friends to follow him (Luke 14). Sure, it’s risky. But it builds faith. It also solidifies a skill in a student or faculty member that they can use for the rest of their lives. New believers are ready to go - but often need permission to share their faith like that.

3.   Follow-up is built in. When someone responds to the gospel in a small group, the community is already there. The gospel is shared by a friend, a group of friends witness the decision, they celebrate together, and they pray together in those first precious moment. Since the follow-up is already built in, students who make decisions in this context are more likely to stick with the community of faith and continue to grow.

4.    We can start a movement. Empower each other to be witnesses, because it communicates permission and inspires others to do the same. When that happens, momentum builds. It becomes the new normal. Last fall, one Arizona student planted a small group and five students showed up. She gave a call to faith, “not because anyone asked her to—but because it had become normal.” You’ve equipped another witness. And when this becomes the new normal, a movement is born.

It’s not easy work to coach calls to faith in small groups. But if we’re serious about reaching every corner of every campus, we need to equip more workers for the harvest, particularly those who know how to help people respond to Jesus and start to follow him.