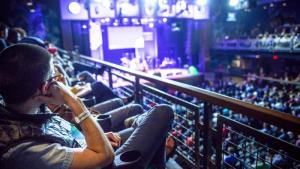 Students at University of California—San Diego held quarterly evangelistic outreach gatherings called The Edge. The goal of these meetings was to inspire skeptics and cynics to take a step closer to Jesus by doing a GIG with a Christian friend. But after four years of doing The Edge, they realized that, even though they had a good number of seekers attending, they never explicitly invited anyone to become a follower of Jesus.

The students weren’t trained to, and they were afraid to weird people out by being too pushy - so only a few people were giving their lives to Jesus.

In the fifth year of the event, they took a risk and made a call to faith with very low expectations. They expected no responses, but 12 students stood up and came to the front for prayer to accept Jesus into their lives!

They began to ask, what if we began giving calls to faith more often? Leaders at UCSD began to dream of a ministry where students were given a weekly opportunity to respond to a public call to faith.

But when they started to do it, not one person responded at large group for an entire year. Instead, they began to hear stories of students coming to faith after large group, or later in the week; in each case, new believers indicated that they wanted to stand during the call to faith, but couldn’t get themselves to do it. They kept making the invitations, refining their ask, until first one student, then two, then three, then eight students at a time began responding at large group.

After giving calls to faith for a couple of years, they noticed that the calls to faith at large groups closer to the beginning of the year saw a larger response than at other times. They began to wonder, What if we made an invitation at our largest large group of the year—the first one? That fall, they gave a call to faith at our first large group of the year and saw the largest response we had ever seen: 10 times the size of the response to any other call to faith. It was amazing! Students were stunned as they watched friends respond to the call.

Every chapter in the San Diego division now make has a practice to give calls to faith and calls to recommitment during the first two large groups at every chapter. It has had a dramatic impact on their ministry:

1. Every chapter that gives a call to faith at their first two large groups sees their largest number of responses those nights.

2. Giving calls to faith at the outset of the year helps distinguish us as a movement of conversion. New students who are evangelistic and passionate about seeing their lost friends come to faith are more likely to join our fellowship.

3. Giving calls to faith is an energizing experience, even for the non-believers who don’t respond. They see our community as a place of transformation where exciting things happen. They see that we don’t just sit around. We act on our faith.

4. Giving calls to faith energizes students because they see it as a manifestation of God’s power and presence in our midst. When they see their friends being transformed by the Spirit, it’s almost intoxicating.

Many chapters around the country have their largest attendance at large group during the first month of school. The first four weeks are a special window of student receptivity to spiritual things. Giving calls to faith during our first weeks of large group provides students an opportunity to respond to Jesus during the time of their greatest openness and receptivity and participation in our large groups.

In Romans 10, Paul asked, “How can they hear without someone preaching to them?” One could justifiably add to Paul’s statement here, “How will they receive Jesus as Savior and Lord unless someone invites them?